Google App Engine is a cloud PaaS (Platform-as-a-Service) product by Google. It allows building auto-scalable applications on top of the Google Cloud platform and provides fully managed services to developers. Ringo runs fine on App Engine for Java. There are some limitations on App Engine compared to running on a dedicated server. For example, asynchronous or long running connections are currently not supported by App Engine itself. On the other hand it provides many interesting proprietary APIs.

It's no problem for Ringo to integrate and call the provided Java services. Storing entities into the App Engine Datastore, sending mails with the Mail API, or accessing the Memcache service is easy. Developers can use the normal Java integration Ringo has to call these services. It's also possible to use Datastore persistence frameworks like Objectify to make storing entities even easier.

Google App Engine for Java requires applications to be packaged as Java web applications. ringo-admin can create App Engine boiler plate code for use using the create command with the -g or --google-appengine switch: 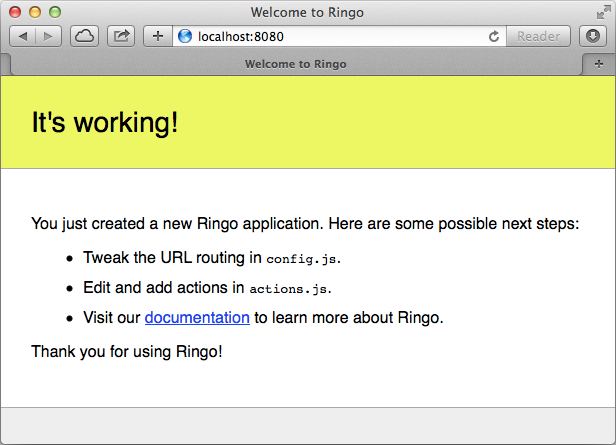 Once you have done this you can upload the application using the appcfg command line tool from the SDK.

This will as for your Google accout credentials and deploy the application on Google's infrastructure.

One potential problem that may affect low traffic sites on Google App Engine for Java is slow application spin-up. Ringo's app engine boilerplate comes with precompilation enabled, which should should help. Startup time can further be improved by running Rhino in interpreted mode. To do this, add the following lines to the ringo servlet definition in WEB-INF/web.xml to set the optlevel parameter to -1:

While this will make Ringo run obviously slower, the improved startup time and reduced memory usage will outweigh the performance hit. Using the interpreted mode should be only considered if the application starts and stops instances at a high number and the load is not predictable.

To use other packages than the standard modules drop them into WEB-INF/packages directory. So if you're using e.g. Stick as web framework, this is the right place for it.